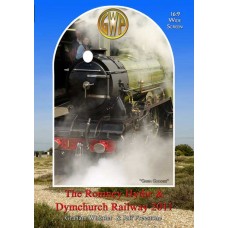 This is the fourth programme that GWP has made of this fascinating little railway and the first shot in high definition and available as a DVD and BluRay. It features most of the lines fleet of locomotives with dramatic cab ride and track side action. Also featured is some amazing parallel running on the double track section between Hythe and New Romney.

About "The Romney Hythe & Dymchurch Railway 2011"

The Romney Hythe and Dymchurch Railway is a 15 inch miniature express railway 13.5 miles long and runs from Hythe to Dungeness on the Kent Coast. Built by Captain JEP Howey in the 1920s it has the largest collection of one third scale express steam and diesel locomotives in the World.

Most of the locomotives are featured including a dramatic cab ride and trackside action with Dr Syn. Amazing footage of Northern Chief taken with some parallel running on the double track from a special camera train driven by the railway’s general manager Danny Martin. There is full coverage of the all action Autumn Gala with double and treble heading. Also featured is the family weekend with Billy The Bug and Friends.

This DVD was filmed with the full co-operation of the Railway by GWP. The script was written by GWP with technical help from Andy Nash who drives Northern Chief in the film, and narrated by Nigel Williams.

Filmed and edited by Graham Whistler and Jeff Freestone in 2011. This is the 4th DVD GWP have made of this railway.

I grew up with the RH&DR, and it is a huge part of my life. I think this programme shows the very best the railway has to offer in its current form, and I was particularly pleased to see the brilliant cab and trackside action with "Doctor Syn", which is the locomotive that my Dad and I like best. I met Jeff Freestone at the 2011 Gala whilst this production was being filmed, and of you look closely at the end, I make a small cameo appearance! Christopher Nelson, Maidstone, Kent