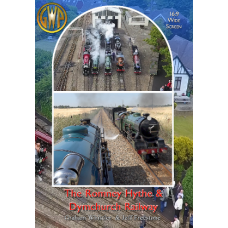 This DVD, the 5th made by GWP at the RH&DR, was filmed and edited by Graham Whistler and Jeff Freestone with full co-operation of the railway. The script was writeen by Graham Whistler with technical help from Andy Nash. It is also available as a BluRay.

You create stunning pictures with a camera! Thoroughly enjoyable and captured the feel of a gala celebration.First class film with excellent sound and voice over with wonderfully clear sharp pictures. I hope it sells well as it deserves to.
Christopher Nelson |

I received this DVD yesterday morning and spent most of the day returning to it! This is a wonderful record of the 90th Anniversary Celebrations. The aerial drone footage provides further unique spectacular views of the railway, giving it a further dimension, particularly in the Cab Ride segment with "Hurricane". Having grown up with the railway as a child, we have got to know many of the staff over the years and it is good to see people such as Danny Martin and Andy Nash making appearances in this film! This is an excellent memento for those who were there, or the next best thing for people who could not attend. A great job!
Andy Nash |

Andy Nash Graham. I really enjoyed it. Many thanks.