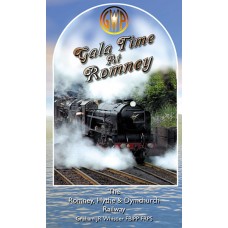 This little railway is shown off to its absolute best, with beautiful shots from the lineside, supplementing a trip along the whole route on the footplate, a wonderful experience!

About "Gala Time at Romney"

The Romney Hythe & Dymchurch Railway is unique as the biggest and best train set in the world. This video displays its delicious charms to the full. The railway's unusual origins are explained and its colourful miniature locomotives are each presented with a variety of action shots. You take a place at the driver's side to enjoy the elating feeling of speed as the tiny train cruises across the marshes at over 20mph on rails only 15 inches apart. The Romney Hythe & Dymchurch Railway was conceived in the 1920s as a very special plaything and has survived in wonderful order. It was built over a route nearly 14 miles in length, as the world's only mainline miniature.

This video invites you to share in its rare delights. It was shot over the famous Gala time, when special things happen and all the Romney engines are shown together with some rare visitors.