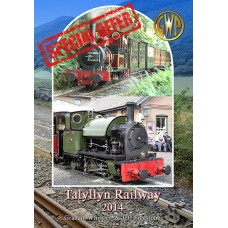 The Talyllyn Railway runs on 2ft 3in narrow gauge tracks from Tywyn on West coast of Wales through a dramatic unspoilt valley 7 1/4 miles to Nant Gwernol. It was established by the 1865 Act of Parliament to carry passengers and slate from the Bryn Egwys Quarry. Talyllyn Railway was saved from closure in 1951 by a small group of amateur railwaymen led by Tom Rolt and became the first preserved railway in the world.

We have been enjoying family holidays in North Wales for many years and they wouldn't be the same without spending some time enjoying the Talyllyn Railway. The DVD has been eagerly anticipated since we saw the filming in July 2014 - and we're on it, much to the children's pleasure! We were impressed by how professional the DVD was, and we think it will have a broad appeal - from the holidaymaker enjoying the ride to take advantage of the fantastic walks up the line,through to the serious steam buff! The film evoked many happy memories and I would recommend it to anyone who has enjoyed a visit to the Talyllyn.
David Moseley |

I’ve always maintained that if you asked the ‘man in the street’ to name a narrow gauge railway he would probably name the Ffestiniog such is the power of its promotional ability but if you asked them to describe it they would unwittingly describe the pioneering Talyllyn. This DVD shows the Talyllyn at its very best – Graham and camera man Jeff Freestone really do produce beautiful videos. Shot over some glorious Welsh days there is really little to fault in this well crafted snap shot of this lovely railway. A professional voice over by Nicholas Owen adds to the quality. The engines are immaculately turned out and the coaches are equally clean and smart. As an overview of the day to day operation of a preserved railway this DVD is hard to beat and is available direct from Graham Whistler Productions.
Colin Smith |

Thank you, this is a most excellent production. I've been unable to visit Tywyn and the railway since 1980 and to see the changes made since then is astounding. Even more has changed since I first visited in 1960 and was "roped in" as an extra in a Rank Organisation short newsreel type film for the "Look at Life" series, I think it was called. During that week we travelled, several times behind "Edward Thomas" and to see it again, looking young and as fit as ever, in this DVD was fantastic. Can I also praise the staff at GWP. This and another production were ordered mid to late afternoon on 23rd December and both arrived before lunch on Christmas Eve. Great service, thanks.
Philip Leslie |

Thank you for the really excellent dvd of the Talyllyn Railway. I watched it last evening and very much enjoyed it. It must be some fifteen years ago that we travelled on the TR when touring North Wales, but my real nostalgia goes back to 1953 & 1954. Then a teenager I spent part of two summer holidays as a volunteer. Much has changed, but the scenery is just as beautiful as ever and shows up so well on your dvd. I think the ex Corris locos had just arrived then, but the brunt of the traffic was taken by "Dolgoch". I still think she is one of the prettiest narrow gauge locos and it is good to see her in such immaculate condition in your dvd. G Shutter 1 Dec 2014