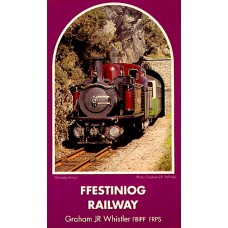 Made in the glorious summer of 1992, this classic portrait of the world famous railway is a superb record of a unique attraction. Includes special extra 40 minutes feature "The Wonderful World of Whistler".

For those who seek a record of the railway at its best, with views up and down the line, then this is the video. The programme was made in 1992 and is the best ever of the Ffestiniog Railway, showing the line in bright sunshine with superb photography. Double-Fairle, Merddin Emrys, built at Boston Lodge in 1879, is seen restored to its Victorian appearance. That and ALCO-COOKE 2-6-2T Mountaineer, from 1917 are the main locomotives featured. There is lineside and footplate footage, along with a look behind the scenes at the time in Boston Lodge, the the 'new' double-Fairlie, David Lloyd George being constructed.

The weather is magnificent and all the footage has been shot in bright sunshine. This is a wonderful period piece and has been re-issued simply beacuse it has not been surpassed and people are continuing to ask for it. The video was shot with the full co-operation of the staff and the General Manager of the railway (then Gordon Rushton) and the well-balanced commentary was written by Peter van Zeller and spoken by Richard Rees.

Mountaineer runs in to Tan-y-bwlch on a perfect summer's day. This is the weather in which all the photography was taken. The video is a tranquil and pleasant record of a trip up and down the Ffestiniog Railway and is the reason why it continues to be so popular.

The perfect gift for any steam enthusiast.

A wonderful souvenir of a trip on the Ffestiniog Railway.