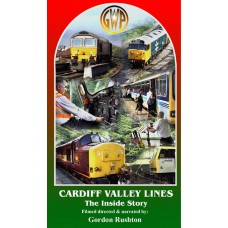 The inside stroy of Britain's smallest UK rail franchise showing the Valley lines in their heyday. The programme also includes an additional feature on the Brecon Mountain Railway.

The Cardiff Valley Lines were privatised and became the smallest of the UK franchises. With services from Penarth and Barry to Treherbert, Aberdare, Merthyr and Rhymney and with sidelines to Coryton, Cardiff Bay and a service to Newport. Valley Lines were probably running in the densest DMU operation in the UK, serving Cardiff, the capital of Wales. And they had a jewel in the crown, a set of morning and evening commuter trains run with locomotives and coaches. Most of the time venrable Class 37s hauled 4 car trains of Mk2 coaches but occasional visitors could be found. The running of Class 37s with frequent stops and full-power starts attracted a lot of attention from the enthusiasts.

This video, taken in 1998, shows the full glory of the service, with locomotives, the DMUs and the visitors. Arriva Trains Wales now has the franchise, so things are not quite the same. This video offers Valley Lines in its heyday! The extra feature shows the Brecon Mountain Railway, with two glimpses - one in 1989, the other in 2000. The Graf Schwerin Lowitz and Baldwin are shown.