Bluebell Railway (Through to Kingscote 1994) DVD 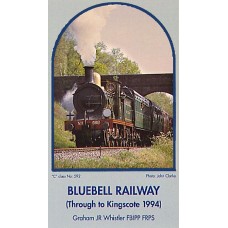 Filmed in 1994 and featuring lineside and cab views, this video is an evocative period piece and an excellent record of the railway at that time.

About "Bluebell Railway (Through to Kingscote 1994)"

The Bluebell Railway is the oldest standard gauge preserved steam railway in the UK. Closed in 1958 it was reopened by the Preservation Society in 1960. Operated with a professional staff, many of whom are volunteers, this railway has one of the finest collections of steam locomotives to be seen and top quaility carriages restored in its own Horsted Keynes workshop. The railway has been steadily expanded and extended.

This video shows the laying of the new track from West Hoathly to Kinscote in early 1994 and then the line in operation. Features from the footplate and from the lineside include locomotives large and small. No. 96 Normandy, No. 323 Bluebell, No.847 S15, No. 33001 Q1, No. 35027 Port Line are all seen. The programme is an evocative period piece and an excellent video of the Bluebell Railway at that time. The expansion and extension has continued over the intervening years and hopefully, soon there will be a companion programme produced to celebrate the entry into East Grinstead.