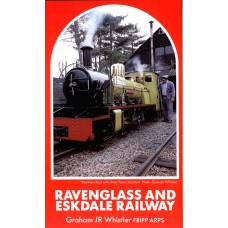 This is the video that started it all. The first GWP railway programme, filmed in 1988 - 1989 and now digitally remastered. The film includes all the Ravenglass & Eskdale Railway locomotives travelling through beautiful lakeland scenery.

The Ravenglass & Eskdale Railway is a seven mile long, 15 inch gauge railway, running through one of the most beautiful valleys in the Western Lake District. The video was shot between 1988 - 1989 and includes dramatic footage of all the railway's steam locomotives including a return trip with Northern Rock and driver Trevor Stockton. Also included is the building of Northern Rock 2 in the railway's workshop for a Japanese client. Final testing of the finished locomotive and the Commissioning of Northern Rock 2 on 10th January 1990.

The video was filmed with full co-operation of the railway by GWP. The script was written by Peter van Zeller driver of River Esk and narrated by Garry Bond. The commisioning of Northern Rock 2 was narrated by General Manager Douglas Ferreira OBE. 20 years later GWP have now remastered this the first of a major series of over 30 broadcast quality railway DVDs.

Previously published 1989 in VHS - digitally remasted for DVD in 2009.