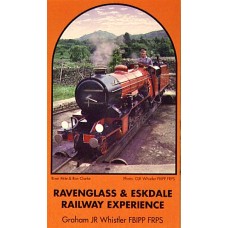 Filmed in the spring and summer of 1996, featuring all of the steam locomotives. Also ride with the driver of River Mite and enjoy the magnificent scenery from the footplate.

The first 60 minutes of this souvenior DVD takes you up the line, tells the story, shows all the locos and the magnificent mountain scenary. The story is written by Peter van Zeller driver of River Esk and narrated by Richard Hollingham. Filmed and directed by the Royal Photographic Society award winning team of GWP in 1996.

Also filmed in 1996: Ravenglass and Eskdale Railway Cab Ride, the second 60 minutes of this DVD takes you up the the line on River Mite with Driver Ron Clarke. No formal script but Ron talks us up the line, points out things of interest and explains what he is doing.

Graham's camera records all the up journey and higlights of the return including the crossing with River Esk.

This DVD is a wonderful souvenir of your trip on the Ravenglass & Eskdale Railway. Broadcast quality, this double feature runs for 120 minutes.

This DVD is the usual Whistler quality - superbly filmed and produced - will remind those who have visited the Ratty of the beauty of the scenery and the enjoyment of a ride on the line. If you haven't yet visited you will want to when you have seen this. The second part of the disk is how the line is from the drivers point of view as described by Ron Clarke - driver of River Mite for almost 25 years.