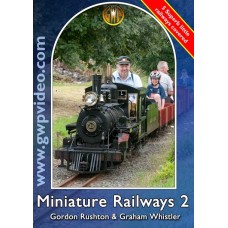 Following on from the first Miniature Railways, this all new programme features five new railways some of which are privately owned and rarely open to visitors.
The railways are Echilles Wood, The Wilderness Railway, Norton Hill Light Railway, Eastleigh Lakeside Railway and Exbury Gardens.

Ninety minutes of exciting video, on the train, at the lineside, and in the locomotive sheds on five individual railways, some of which are private, some of which only open at restricted times. We have gone behind the scenes to show you these railways as they have not been seen before.

Echills Wood is a wonderful railway, with extensive trackage, and a section of line that allows parallel running - we have done that - two of the biggest 7¼ inch gauge locomotives in Britain, filmed together on a parallel run - unmissable! There’s a lot more action at Echills Wood, that also hosts many other locomotives on its long tracks. We went lineside and took action shots of the trains for your pleasure.

Visit the remote and very private Wilderness Railway, locked away in a secret location. This 10¼ inch gauge railway has an intertesting run and is not open to the public. See the huge No. 25 in action on the Norton Hill Light Railway, along with rare Yugloslav 2-6-2, and 0-8-2 NG prototypes, there is steam action on this fast and difficult line, as the trains blast up the very steep hill back to the terminus.

See the mixed 7¼ and 10¼ gauge Eastleigh Lakeside Railway. Visit and enjoy the train on the Exbury Gardens 12¼ gauge railway. There is never an idle minute during this exciting video.

The Best of Miniature Railways DVD
£12.99
Add to Cart