Categories
Home » How to Drive a Steam Locomotive DVD

How to Drive a Steam Locomotive DVD 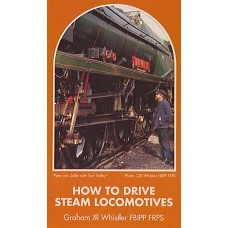 Peter Von Zeller, a driver on the Ravenglass, gets to grip with the regulator and tells all about how it should be done. This is perhpas the best selling Whistler video of all time.

About "How to Drive Steam Locomotives"

You will not be qualified to drive Bulleid 4-6-2 Taw Valley on the main line after watching this video but you will gain a clear insight into the operation of any steam locomotive, from Stephenson's Rocket to the most modern express passenger locos, whatever their size, right down to 5 inch gauge, the methods have much in common.

See inside the cut away Bueid 4-6-2 Ellerman Lines at the National Railway Museum, prepare the 2-8-2 River Esk for work on the 15 inch gauge Ravneglass and Eskdale Railway. Join the footplate course for enthusiasts as the West Somerset Railway and ride with experienced crews on GWR Collet 0-6-0, No 3205. Ride the footplate of SR S15 Class 4-6-0 No 506 on the Mid-Hants Railway and much more. Enjoy the thrills of steam locomotives from the footplate and lineside.

Researched, written and narrated by Peter van Zeller. Filmed with the full co-operation of the Keighly and Worth Valley Railway, the Mid-Hants Railway, the National Railway Musuem, the Ravenglass Eskdale Railway and West Somerset Railway. Shot and edited on Sony broadcast equipment, produced by Graham Whistler Productions. Graham Whistler's 5 inch gauge garden railway has provided some interesting insights into how to drive steam locomotives, which you will see tested out on their larger counterparts. This video is an entertaining and fascinating guide for all true steam lovers.

This excellent programme has been written and researched by Peter van Zeller, who also gives the clear and informative commentary. Throughout the film the viewer is aware of first-class camera work, not only in the fine shots of locomotives in action, accompanied by superb sound, but also getting to the not readily-accessible areas of a steam locomotive. Because of its practical and enjoyable content this film is likely to be viewed many times over.

Up Front on the West Somerset Railway DVD
£12.99
Add to Cart