Welcome to our huge selection of programmes on steam trains and narrow gauge railways where quality and good photography matters.

All retail orders are now processed by BecksDVDs. For all trade enquiries, contact GWP.

Avaliable to buy now on BluRay and DVD. This all new film features Whillan Beck, Ravenglass & Eskdale Railway Preservation Society's new steam locomotive, now fully restored and in service on the railway in July 2018. It was formally known as "The Train from Spain" and early footage in Spain and rebuilding and testing in Ravenglass in in our new R & ER 2017 Bluray/DVD. Some of the railways other steam locomotives are also featured.

Avaliable to buy now on BluRay and DVD. This all new film includes plenty of action from three of the railway's resident steam locos and diesel Douglas Ferreira. This film will take you on the complete journey featuring River mite with cab ride and dramatic trackside action. The Talyllyn railway was first established in 1865, it was saved from closure in 1951 by a small group of amateur railway men led by Tom Rolt, becoming the first preserved railway in the World.

This video, shot in July 2014 with perfect weather shows this beautiful line in all its glory.

The Talyllyn railway runs on 2ft 3in narrow gauge tracks from Tywyn on West coast of Wales through a dramatic unspoilt valley 7 1/4 miles to Nant Gwernol. It was established by the 1865 Act of Parliament to carry passengers and slate from the Bryn Egwys Quarry. To see our full range of train titles, please visit our website. 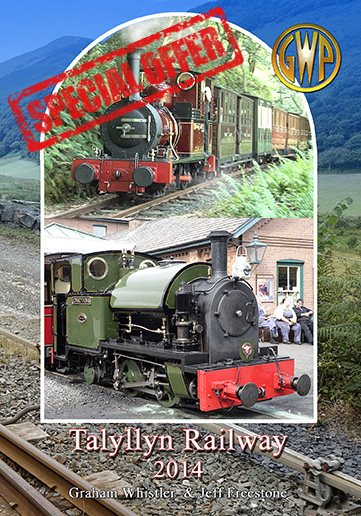