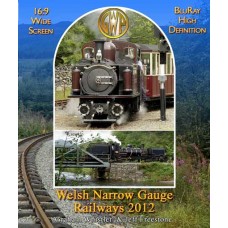 One of GWP's most successful programmes was the Great Little Trains of Wales and this new DVD / BluRay brings many of the lines featured in the original right up to date. There is coverage of the now completed Welsh Highland Railway plus all new footage from the Ffestiniog, Vale of Rheidol, Welshpool & Llanfair, Bala Lake and Llanberis Lake Railways.

The Welsh Narrow Gauge Railways run through dramatic countryside and operate with steam locomotives. The railways were mainly constructed for industrial use and most served the now defunct slate industry. Now they are all preserved and operate as major tourist attractions.

This all new GWP DVD was filmed in 2012 and features the following railways:

Filmed and edited by GWP with the full co-operation of the railways. Also available as DVD. Narrated by Nigel Williams.