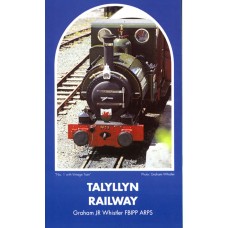 The wonderful period atmosphere of this pioneer of all the preserved railways is skillfully shown in this beautifully filmed programme of this unique narrow gauge survivor.

The Talyllyn Railway is one of the greatest little trains of Wales. It runs 7¼ miles from Tywyn along unspoilt valley and over the dramatic Dolgoch Viaduct to Nant Gwernol. Built to carry slate from Bryn Eglwys Quarry, it was the first narrow gauge railway to gain an Act of Parliament to carry passengers. For 85 years it ran the same two locomotives and five coaches. When the line was faced with closure in 1950, it was saved by enthusiasts who formed the first ever railway preservation society. Its volunteers rebuilt the track and original rolling stock without spoiling its character.

This video was shot with the full co-operation of the Talyllyn Railway Preservation Society in July 1990, when the line celebrated 40 years of preservation. It includes No. 2 Dolgogh in its 1950's livery and No.4 Edward Thomas, painted as 'Peter Sam'.

There is plenty of lineside action and interesting driver's eye views from the footplate of No 1 Talyllyn on its return trip from Tywyn Wharf to Nant Gwernol. Talyllyn passes No.3 Sir Haydn and No. 6 Douglas en route. The video concludes with the naming of the new loco No. 7 Tom Rolt in May 1991.

The commentary was written by Peter van Zeller and narrated by Richard Rees. The video was shot and edited on Sony professional broadcast equipment. Produced and directed by Graham Whistler, it is a timeless programme and much celebrated. The superb clarity of vision and sound available with DVD offers the chance to enjoy these crisp, colourful scenes as never before.